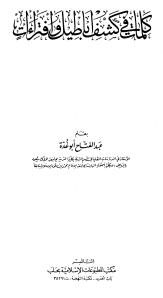 In a previous post, we uploaded the book Jawab al-Hafiz Mundhiri and claimed that the small risalah, Kalimat fi Kashf Abatil wa Iftira’at was appendixed to the end of it.

It turns out that although the uploaded edition of the book includes the appendix, the pdf version excluded it.

I have therefore uploaded the treatise separately. It is basically a response by Shaykh ‘Abd al-Fattah Abu Ghuddah to accusations leveled against him by Shaykh Nasir al-Din Albani in the foreword to his edited edition of Sharh al-‘Aqidah al-Tahawiyyah.