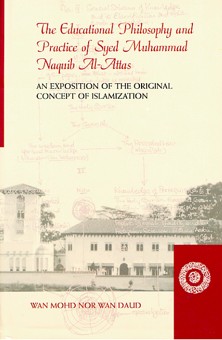 THE EDUCATIONAL PHILOSOPHY AND PRACTICE OF SYED MUHAMMAD NAQUIB AL‑ATTAS

The currency of modern educational ideas in the Islamic lands is a historical testimony to the epical failure of the Muslims over the past two hundred years, and practices are the slow, but inexorable, unravelling of the Muslim mind. Education in the contemporary world is like the most pervasive ‘conveyor belt’ transmitting the ideas of the dominant culture and the values system of politico‑economic elite to the credulous and dominated generations. Education in the true Foucaldian sense is plugged into the grid of reigning ideas and values, not necessarily predicated on ‘truth’. It is also a master technology of control, which leaves nothing untouched. The content of modern education and the whole process of schooling/disciplining are aimed at ‘manufacturing’ human beings to fulfil certain political and socio-economic objectives set by the political powers that be. The individual and the needs of his self are absent from the whole project of modern education. The Muslim case was aggravated by our home grown ‘epistemological lackeys’ who, in their effort to ingratiate the colonial masters, messed up everything. They failed to live up to their traditional religious heritage and discover its relevance in the changed times, and miserably failed to see the West for what it really is.

Occasional sparks of wisdom were visible in the Muslim societies but they were soon overtaken by the ‘secular darkness’ viciously spreading in the Muslim lands in the wake of colonialism. 1qbal’s following couplet now looks poignant: Tāza phir dānish‑e‑ḥāïir ney kiyā wo siḥr‑i‑qadīm. Guzar is ‘ehd mēn mumkin nahīn be chūb‑i‑Kalīm Modern knowledge has revived the ancient magic of Pharaoh. No one can pass through this age without the staff of Moses. Muslim civilization in the present times looks like a tree, withering fast, losing sap, leaf‑less and fruitless, ready to die or about to be cut down for others’ fuel. But lo! All of a sudden a robust and sturdy shoot sprouts from the trunk. The tree lives and the forebodings die. This new symbol of the invigorated Muslim life is none other than the formidable Al‑Attas. And Wan Mohd Nor Wan Daud has done a great service to the Muslims in general by writing this book.

It is interesting that as the Muslim heartlands bleed and lie humbled in the face of the renewed colonial onslaught, a man from the backyard of the Muslim civilization unexpectedly emerges to lead the battle for the Muslim soul. No adjectives can do justice to the achievements of Al‑Attas. His contribution to the Muslim intellectual life is original, comprehensive and practically viable. First and foremost, as the author says, he has pointed out the root cause of Muslim malaise as “confusion and error in knowledge”. This sets the stage for all socio‑political, cultural and educational ills. This in turn fundamentally affects the individuals who lose Islamic adab.

Their selves are replicas of falsehood and they span out into all walks of Muslim life, thus aggravating the confusion even further. This vicious coterie of false leaders sets up a macabre play of musical chairs, while the Muslim peoples look on befuddled and bamboozled. In other words, apparent Muslim failure is merely an exteriorisation of a deep‑seated failure which is spiritual and epistemological. Dr. Daud fully elaborates Al‑Attas’ seminal contributions to the religious thoughts and their bearing on the modern Muslim education. Following the tradition of the higher Sufis, Al‑Attas delineates the contours of Islamic metaphysics and world‑view of Islam. His metaphysics is rooted in the Islamic fundamentals as set forth in the Qur’an and the Sunnah. Once we get this philosopher’s stone, everything is transmuted. Eyes begin to see and hearts begin to hope. The magical dazzle of the modern secularism and its technological achievements begins to flicker off and we see things in proper perspective. This is adab which is a blessing of proper worldview of Islam. The man of adab is central to the whole Islamic scheme of things. And adab means: recognizing and acknowledging the right and proper places of things, the acquisition of good qualities and attributes as well as actions to discipline the mind and soul, and the avoidance of erroneous actions. Adab is built on knowledge, proper methods of knowing and ḥikmah (wisdom) leading to ‘adl (justice). The book dwells long at Al‑Attas’ most sustained and in‑depth critique of the modern West and its conception of reality. His ideas bring into sharp relief the “the fundamental elements, characteristic of the Western spirit and worldview, that are antithetical to Islam, namely the dualistic view of reality, the secular ideology, the humanistic philosophy and the tragic conception of life”. These elements are worked into the modern humanistic education at universities through literary classics and secular science and philosophy. The modern university suffers from the absence of epistemological authority and the normative ‘character’. The ideals and aims of modern education are always in flux and trapped in a Sisyphean process of becoming. Authority in Muslim education is predicated on the divine guidance and the Absolute Truth of the Holy Qur’an.

The presence of the Holy Prophet at the heart of the Muslim education saves it from the meaninglessness of modern becoming and sets up a model before individuals to emulate and achieve. Islamization of modern knowledge is the natural consequence of Al‑Attas’ Islamic metaphysics. Even at the risk of plagiarism and simplification, a real danger to Al‑Attas’ preternatural ideas, one cannot help saying that Islamization essentially means bringing the farḍ kifāyah knowledge UNDER the purview of the farḍ ‘ayn knowledge. This is what Islamic adab demands and this is what leads to Islamic adab. As soon as the divine touches the mundane, its secular crookedness straightens and its profanity is sanctified. Hierarchical view of reality is central to the whole project of Islamization. Al‑Attas’ perspective on the role of language in the process of Islamization in the early Islamic history and its role in de-Islamization and secularisation of the Muslims in the modern times is an intellectual tour de force. His efforts to rediscover the original definitions of the key terms of Muslim discourse and his resistance to their semantic erosion have greatly strengthened his argument for the Islamization project. If a human being can be ‘Islamised’, so can all his endeavours be. Knowledge, as Dr. Daud shows in the light of his mentor’s ideas, is an attribute of man. Once modern secular knowledge is plugged into the grid of farḍ ‘ayn knowledge, it will be divinely ‘enlightened’. The author makes a convincing case for a radical transformation of Muslim university education, incorporating the ideas of Al‑Attas which have universal relevance. He enumerates all the efforts undertaken in the major Muslim lands in response to the colonial education and the challenge of the modern knowledge and exposes their inadequacy. Interestingly, the author does not mention Jami‘ah Usmāniah, Hyderabad Deccan, where the medium of instruction was Urdu and which produced internationally recognized scholars representing true Muslim character. The Jami‘ah was a glorious effort, begun with great difficulty under the interfering English nose. Pakistan is now paying the wages for its forgetfulness of such a successful venture. The stress to transform the higher education is understandable. It is the higher education in the Muslim lands that has brought us low and it is where we traded our dignity for trivial and ephemeral things.