The author of Al-Taḥqῑq al-Bāhir, Imām ῾Allāmah Hibat Allāh al-Tāji, has consulted tens of works of the ḥanafi masters in his work. These include principal texts (mutūn), commentaries (shurūḥ), fatāwā (legal rulings/edicts) and uṣūl (jurisprudence). However, when referencing or quoting other works, he often does so through the intermediary of secondary sources (1:57). In critically editing the work, Mawlana Dr. Osama Sheikh has endeavoured to visit the original published source of most of these references to verify the accuracy of the quotation. This proved to be a challenging and cumbersome task, as not all the references that the author mentions have been published, while some may not even be available anywhere in any format. In addition to this, Mawlana Dr. Osama Sheikh also used three commentaries of Al-Ashbāh wa ‘l-Naẓā̕ir in manuscript form. These are ῾Umdat al-Nāẓir, Tanwῑr al-Adhhāni wa ‘l-Ḍamā̕ ir, Kashf al-Khaṭā̕ir. During the course of his critical editing, Mawlana Dr. Osama Sheikh discovered that the author has often been casual in quoting from earlier works, not prioritising accuracy. This has in some places altered the meaning of what the author of the original source had intended. In addition to this problem, all the manuscripts of Al-Taḥqῑq al-Bāhir are filled with errors by the copyists. This made it more important to visit the original source of each reference quoted by the author.

Mawlana Dr. Osama Sheikh has very helpfully added headings in square brackets to each section that discusses a new mas῾alah or issue. This enhances the reading experience and makes it much easier to search for discussions on different issues.

Where deemed necessary, ḥarakāt and i῾rāb have been added throughout the book. For a final thorough proofreading before going to print, the publisher, Dār al-Lubāb (Istanbul/Beirut), employed a team of in-house proofreaders/researchers. However, despite this, the book contains a lot of errors, which could have been easily avoided. Errors are generally of the following categories: typographical errors, errors in i῾rāb, omitted letters or words, and some mistakes made by Mawlana Dr. Osama Sheikh himself.

Another shortcoming of this edition, in my view, is that the actual matn (text) of Al-Ashbāh wa ‘l-Naẓā̕ir has been omitted by Dār al-Lubāb. For such a work, one would normally expect the matn to be at the top of the page, demarcated from the commentary by a line. Instead, all eight volumes of this edition contain continuous, non-stop commentary with words and parts of sentences of Al-Ashbāh wa ‘l-Naẓā̕ir within brackets in red ink. I believe, this was done by Dār al-Lubāb in its desire to keep the number of volumes down. Had Dār al-Lubāb added the matn at the top of the pages, the book may have been in ten volumes and its beauty and usefulness would have been much enhanced.

I have no doubt that the book will, at some point in the future, undergo a revision and we shall see a better second edition. However, given the sheer size of the book and the finances involved, only Allāh Most High knows when that may be. Until then, the serious student of ḥanafi fiqh and the scholar of fatwa find themselves with a difficult decision to make – whether to purchase this first edition of this brilliant work or risk waiting many years for a better revised second edition, or, even worse, see the book go out of print. This is further compounded by the hefty price tag (currently, £130-£150 here in the United Kingdom).

[1] Mawlana Dr. Osama Sheikh completed his Dars-e-Niẓāmi (also known as Shahādat al-῾Ālimiyyah) course/master’s degree at Jāmi῾ah Fārūqiyyah, Karachi in 2007. He then completed a PhD degree at the Umm al-Qura University in Makkah Mukarramah.

Muḥtaram Mufti Abrar Mirza (may Allah accept and reward him), the Head of Darul Iftaa Chicago, trains students in the field of iftāʾ. One of the challenging aspects of iftāʾ is giving preference to the view of one mujtahid over another. This becomes more challenging when the relationship between both mujtahids is of a very high caliber. While we are nurtured to respect and revere our teachers and seniors, we are also nurtured to maintain academic honesty.

Despite such profound belief in the knowledge and academics of Imam Abū Ḥanīfa, Imam Ṭaḥāwī differs with him and substantiated his differences. To establish the dominant view in these cases, it is pleasing to note that two students of muḥtaram Mufti Abrar Mirza, under his supervision, have compiled this book, which will be a means of benefit to ʿulamāʾ and students of knowledge alike.

It is my fervent duʿāʾ that Allah accepts the efforts and sacrifices of Mawlānā Abu-Obaidah Anwar and Mawlānā Talha Waseem. May Allah grant them baraka in their ʿilm and make this contribution a great thawāb jāriya for them, their parents, and muḥtaram Mufti Abrar Mirza.

Towards the completion of our iftāʾ course, our teacher, Mufti Abrar Mirza (may Allah reward and accept him), tasked us to make taḥqīq on the non-ʿibādāt chapters in Sharḥ Maʿānī al-Āthār where Imam Ṭaḥāwī differed with Imam Abū Ḥanīfa (may Allah have mercy on them). Hence, we sifted through the latter half of the book, starting from Kitāb al-Nikāḥ, and found sixteen such chapters. We did not address those chapters wherein Imam Ṭaḥāwī disagreed with fuqahāʾ other than Imam Abū Ḥanīfa.

To determine the rājiḥ view of the madhhab, we perused all the books of the fuqahāʾ available to us, whether as printed copies or digital manuscripts, in order to find their explicit or implicit preference in each chapter. After collecting the views of the fuqahāʾ, we validated our understanding and application of the views of the fuqahāʾ by referencing the works of the akābir, primarily from the Indian Subcontinent, though not limited to it.

We arranged the taḥqīqāt such that we prefaced each taḥqīq with a table summarizing the views of the fuqahāʾ and the rājiḥ therefrom, mentioning the rājiḥ first. Thereafter, we discussed the ikhtilāf and brought the discussion on the rājiḥ view towards the end of the taḥqīq, thereby emulating the practice of many of the fuqahāʾ, such as Imam Marghīnānī (may Allah have mercy on him).

Of course, none of this could have been possible without the tawfīq and mercy of Allah, and, for this, we express our praise and gratitude to Him. We also express our gratitude to each of our teachers for all the effort they have made and continue to make on our behalf, especially to Mufti Abrar (may Allah reward and accept him) for his guidance and feedback throughout this project and the entire duration of our iftāʾ studies. We would also like to acknowledge that, in our humble efforts, all our successes are from the mercy of Allah and all our mistakes and errors are from ourselves and from the accursed Shayṭān. We thereby ask Allah to accept our humble efforts and the efforts of all those striving for his dīn and forgive our shortcomings. Āmīn.

ʿAllāmah Ḥasan b. Tūrkhān al-Āqḥiṣārī’s (951-1025 AH) abridgment of ʿAbd Allāh b. Aḥmad al-Nasafī’s Manār al-Anwār fī Uṣūl al-Fiqh, entitled Samt al-Wuṣūl ilā ʿIlm al-Uṣūl, is considered by some to be the most excellent of al-Manār’s abridgments. While it may be useful to formally study on its own (or with a commentary), I believe that one clear use of this abridgment is for students of one of the commentaries of al-Manār, such as Mullā Jīwan’s Nūr al-Anwār, or al-Ḥaṣkafī’s Ifāḍat al-Anwār. Students of these larger works often lose track of the original text and find it hard to follow the outline provided by al-Nasafī. Given that al-Manār is occasionally cryptic or not as concise as one would want for the purposes of memorization, this work can serve as an excellent study guide and memorization tool.

I am uploading the pdf version that I found available online. This is not the edition published by Dār al-Iḥsān with the edits of ʿAlā ʿAbd al-Ḥamīd, but I have included a picture of the cover in case someone wants to print it along with the body of the text. I suggest students at Darul Qasim use this for review and memorization as they go through al-Ḥaṣkafī’s Ifāḍah.

Cover of the Dār al-Iḥsān Edition

How to Perform Hajj

How to Perform Umrah

How to Perform Ziyarah

With Hajj less than a month away, these concise booklets compiled by Shaykh Saleem Dhorat (db), published by Islamic Dawah Academy, will be of great benefit to those preparing for the blessed journey and anyone else who plans on visiting for Umrah and for Ziyārah to Madīnah Munawwarah. They also contain illustrations when necessary, such as for the blessed pillars (Ustuwānah) in al-Masjid al-Nabawi.

Another useful booklet to obtain – by the same author and publisher – is Useful Advice for Travellers to the Haramayn.

The booklets are conveniently small and thin enough to be carried with on the journey for quick reference and review. 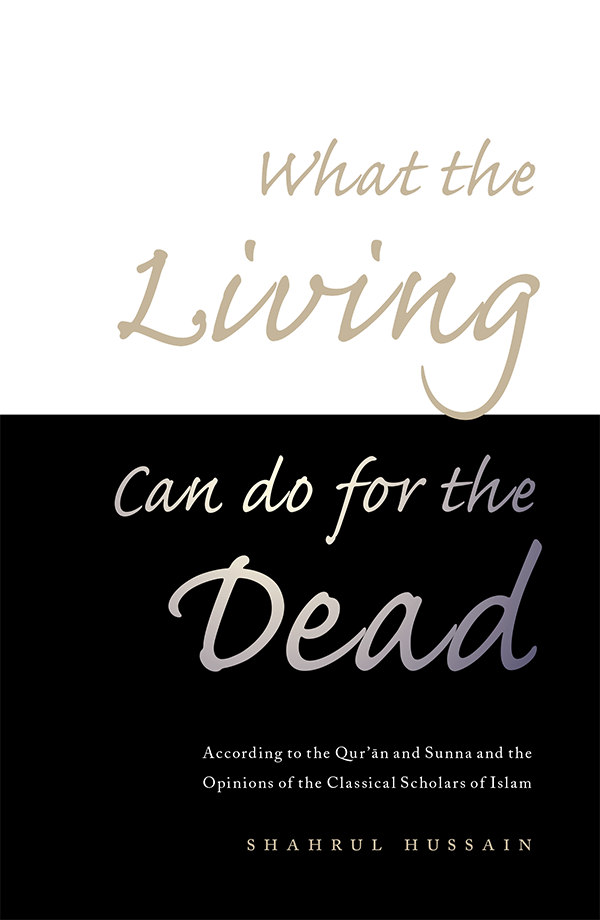 White Thread Press recently released a new publication which covers concepts of eschatology, procedures for funeral, burial, last rites, and practices related to the deceased (such as īsāl al-thawāb, atonements, debts) and graveyards:

What the Living Can Do for the Dead
According to the Qur’an and Sunna and the Opinions of the Classical Scholars of Islam
By Dr. Shahrul Hussain

In order to comfortably read Arabic texts without the need for diacritical marks, one must master the rules pertaining to Naḥw and Ṣarf before embarking on the reading journey. Not only is it an imperative to familiarise oneself with all the rules of grammar, but to be able to apply them into real literature and produce one’s own prose is of more importance. Therefore, it would not be incorrect to say the ability to read Arabic poetry and prose without diacritical marks is a skill acquired, not a science studied.

To reach such a stage, below is a suggested reading list which has been prepared upon request by a student of knowledge.

Note: The list will exclude any non-Arabic primers; the following list has been written for those who already have previous, albeit basic, knowledge of the fundamental Arabic sciences. END_OF_DOCUMENT_TOKEN_TO_BE_REPLACED