The mantle Burdah wears in Islamic literature is unparalleled. A glimpse of this is shown by ʿAbdullah Muḥammad al-Ḥabashī who lists out 48 pages of commentaries and marginalia for the Burdah in his encyclopedic bibliography, Jāmiʿ al-shurūḥ wal-ḥawāshī[1]. The actual title of this instrumental poem is al-Kawākib al-durriyyah fī madḥ khayr al-bariyyah (lit. The Radiant Planets in Praise of the Best of all Creation) written by the Sufi Poet of the Shādhilī order, Sharaf al-Dīn al-Būṣīrī (d. 697/1298). This commentary, titled al-Zubdah (The Choicest), selects from previous glosses and builds a direct bridge from poetry to prose for readers. A salient feature of al-Qārī’s (d. 1014/1606) writings is his ability to take complex topics and weave the thread of understanding through them; this work is no different. Ḥabbūsh edited this work using two manuscripts; the first was from King Saud University and the second from Waliyy al-Dīn Efendi Library in Istanbul which is an extension of Beyazıt Devlet Kütüphanesi (Beyazıt State Library).

In his 25 page introduction, Ḥabbūsh gives brief background information on al-Būṣīrī, his qaṣīdah, and the lasting effect this poem had on poetry that followed him. He also lists out 9 specific commentaries, 2 of which al-Qārī referenced often which are the commentaries of Jalāl al-Dīn al-Maḥallī (d. 864/1460) and ʿIṣām al-Dīn al-Isfarāyīniyy (d. 944/1538), as well as the commentary of Zayn al-Dīn Khālid al-Azharī (d. 905/1500) which was often quoted in the marginalia of the King Saud manuscript of al-Zubdah. Since the three aforementioned glosses have yet to be printed, the value of such a publication heightens. Ḥabbūsh also extracts what he considers controversial couplets that exaggerate the praise of the Prophet, peace and blessings be upon him, listing them out in the following order; 80, 81, 135, 136, 149, 146, 75, 156, 43, and 154. He adds footnotes under some of these couplets explaining how they are problematic and critiquing al-Būṣīrī’s choice of words. However, he does not seem to adopt the reading al-Mullā ʿAlī al-Qārī presents, one that is in line with Sunni creed and law. This is a problem because reading the sharḥ/ḥāshiyah genre requires one to be in sync with the previous research, which is why we see many authors writing glosses on their own texts (matn) because there is no commentator (shārīh) who could better rationalize that author (mātin).

Ḥabbūsh states that al-Qārī’s methodology of explaining contains three aspects. First he explains selected vocabulary (sharḥ mufradāt), followed by parsing (iʿrāb) unintuitive phrases, and concluding by giving a succinct, easy-to-read but eloquent understanding of the couplet. Sometimes al-Qārī switches the order but still touches on all three aspects. One of finest features of this commentary is al-Qārī’s ability to connect the poem to the Qurʾān and Hadith; this rhetorical concept is called iqtibās which literally means “the process of lighting one’s fire from that of another.” In the indexes listed at the end by the editor, I counted 122 ayahs from 52 surahs and 78 hadiths quoted by al-Qārī for a poem totaling 160 couplets. He was able to capture this light from other sources as well, for example he mentioned that couplet 58 was inspired by the eulogy of Fāṭimah, may Allah be pleased with her, for her father, the Prophet, peace be upon him. He also references the famous Majnūn in couplet 5 and al-Buḥturiyy (d. 284/897) in couplet 57, both of whom are famous for the art of panegyric in their own right. Al-Qārī also intertwines supplementary rhetorical and grammatical points along with theological and spiritual allusions (iīmāʾāt) throughout the commentary.

This edition also contains an 8 page bibliography (fihris al-maṣādir wal-marājiʿ) and an unfulfilling one page table of contents (fihris al-mawḍūʿāt). This text would have been enhanced for readers and researchers by including an index for the couplets, proper names and places, and a more expansive table of contents that gives an overview of the wide range of topics covered by both al-Qārī and al-Būṣīrī. One possible addition to the table of contents would be division of the poem into the ten sections (abwāb) mentioned on page 28. The editor ought to have included the full-length poem (qaṣīdah) in the beginning or end of the edition so that it can be read without pauses. It should be noted that the couplets are enumerated throughout the text and are in bold which make it easy to identify. Aside from the last two sentences at the end of the introduction and images of the first and last folios (lawḥah) there is no other information given about the manuscripts. Overall this is a welcome edition with accurate paragraphing, precise punctuation, and reliable referencing. Lastly, other editions of this work have been published since, one by Dār al-Imām al-Rāzī  in Cairo in 2018. Stamped on the title page is the claim Yuṭbaʿ li-awwal marrah alā arbaʿ nusakh khaṭṭīyah (Printed for the first time using 4 manuscripts).[2] Another one by Dār al-Kutub al-ʿIlmiyyah in 2019.[3] However, I have been unable to access these editions and thus cannot compare between them. The expectation is that they should be better but al-faḍl lil-mutaqaddim (special virtue is for the first).

Below are works written regarding plagues/pandemics and general distresses.

The last two Arabic works concern the virtues of solitude, which can be benefited from in light of quarantines and stay-at-home orders.

Desire for the Hereafter – Mawlānā Ashraf ʿAlī Thānawi
A translation of Shawq-e-Watan (in Urdu) written in the context of a plague that had spread in areas of northern India.

Image of the front cover.

Imām Abu Ḥāmid al-Ghazālī needs no introduction to any Muslim. Popularly known by the title of ‘Ḥujjat al-Islām’ (the proof of Islām), Imām al-Ghazālī is one of the most phenomenal scholars and ṣūfi masters in the history of Islām who, till this day, continue to amaze humanity with the depth of their knowledge, wisdom and spiritual light that emanate from their works. Author of tens of major works – mostly in Arabic, and some in his native Persian – Imām al-Ghazāli’s magnum opus is without doubt his monumental Iḥyāʾ ῾Ulūm al-Dῑn (Revival of the Sciences of the Religion). [Kitāb] Al-Arba῾ῑn fi Uṣūl al-Dῑn (Forty Chapters on the Foundations of the Religion) could arguably be described as a miniature version of his Iḥyāʾ – although, the Iḥyāʾ is what it is – it is huge and a very detailed and breath-taking work on the spiritual and inner dimensions of Islām. This current publication is a new and properly researched (muḥaqqaq) deluxe edition of the [Kitāb] Al-Arba῾ῑn fi Uṣūl al-Dῑn by one of the more reputable publishers of the Middle East – Dār al-Minhāj (Riyadh/Jeddah). Measuring 222 x 152 mm, the book is compact. It comprises 543 cream-coloured pages and the text is in two colours – black and maroon. The paper is high quality and the text has been thoroughly researched and compared with several manuscripts of the book, with hadith references and other useful annotations added by the editors throughout the edition – all common features of Dār al-Minhāj’s publications, as we have repeatedly seen over the last several years.

Obviously and without doubt, the Iḥyāʾ is and shall always remain an unparalleled wonder of wonders, and it shall continue to astound academia of the East, as well as the West. The Iraqi-Indian master, Imām Sayyid Muḥammad Murtaḍā al-Zabῑdi’s (1145-1205/1732-1791) massive super commentary on the Iḥyāʾ,titled Itḥāf al-Sādat al-Muttaqῑn bi Sharḥi Iḥyāʾ ῾Ulūm al-Dῑn, has added another layer of astoundment to an already astounding masterpiece.[1] For a much quicker read and a comparatively very brief summary of many (but not all) topics covered in the Iḥyāʾ, Imām al-Ghazālī’s [Kitāb] Al-Arba῾ῑn is highly recommended. Indeed, the book was so much liked by the Al-Ghazāli of India, Imām Mawlānā Muḥammad Ashraf ῾Ali Thānwī, that he desired the book be rendered to Urdu to aid the Muslims of the Indian subcontinent in their character and spiritual reformation. When this was accomplished by Shaykh Muḥammad ʿĀshiq-e-Ilāhī, Imām Thānwī was impressed and delighted, and he expressed this in his foreword to the Urdu translation.[2]

[Kitāb] Al-Arbaʿῑn fī Uṣūl al-Dῑn is actually not a book that Imām al-Ghazāli authored separately. It is in fact the third of three parts of his book Jawāhir al-Qurʾān. When writing this third part of Jawāhir al-Qurʾān, he had indicated that, should someone wish in the future to separate this third part of the book and publish it separately, that will be possible, and, should this happen, he (Imām al-Ghazālī) himself titled this separate book [Kitāb] Al-Arba῾ῑn fi Uṣūl al-Dῑn.[3]

In his introduction, Imām al-Ghazālī states that [Kitāb] Al-Arba῾ῑn fī Uṣūl al-Dῑn is composed of the following:

Thus, there are four categories:

Every category (out of the four) is then divided into ten foundations (or roots).[4]

Thus, the book is in forty short chapters, from which it takes its title of [Kitāb] Al-Arba῾ῑn fi Uṣūl al-Dῑn (Forty Chapters on the Foundations of the Religion).

Images of just some of the manuscripts used for this edition.

Images of some pages.

How to Perform Hajj

How to Perform Umrah

How to Perform Ziyarah

With Hajj less than a month away, these concise booklets compiled by Shaykh Saleem Dhorat (db), published by Islamic Dawah Academy, will be of great benefit to those preparing for the blessed journey and anyone else who plans on visiting for Umrah and for Ziyārah to Madīnah Munawwarah. They also contain illustrations when necessary, such as for the blessed pillars (Ustuwānah) in al-Masjid al-Nabawi.

Another useful booklet to obtain – by the same author and publisher – is Useful Advice for Travellers to the Haramayn.

The booklets are conveniently small and thin enough to be carried with on the journey for quick reference and review. 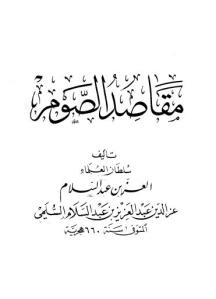 Some time ago, Ustadh Murabit Benavidez gifted me a PDF copy of مقاصدالصوم  by Sultān al-Ulama Imām `Izz al-Dīn bin `Abd al-Salām (ra). For the benefit of others, I thought of sharing this gift during the month of fasting. Please view below for the download link: