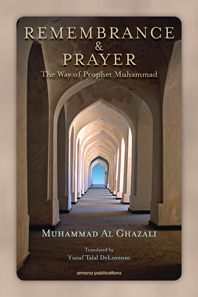 Muhammad Al-Ghazali’s (d.1996) “Remembrance and Prayer” is an incredibly insightful look into the Prophet’s, sallallahu alayhe wa sallam, spiritual worldview.While primarily concerned with the Prophet’s approach to worship, Al- Ghazali’s sometimes subtle criticism of modern decadent cultures underpins the entire work. In a post-traditional world, where secularism and even atheism have displaced a religio-centric worldview, skepticism, rather than faith, is widely championed, and empirical reason, rather than scriptural claims of truth, is considered the true barometer of intellectual sophistication.

In the eyes of many believers, such a state of intellectual affairs has given rise to the sorts of social anathmeas -hedonism, materialism and political corruption, to name a few – that distract and dissuade many from the straight path of Islam. It is within this context that an indignant Al-Ghazali approaches the Prophet’s biography to highlight the central role that thikr and salah played in his life. From the Prophet’s seerah we learn that the modern dichotomy between faith and reason, or intellectualism and obedience to the Qur’an and Sunnah, is in fact a false dichotomy.  Relying on Allah and beseeching His help and guidance is the one and only true path to success in this world and the next, and the Prophet’s example epitomizes the ideal balance between worldly and akhira concerns a believer must have. Al-Ghazali’s subtitle “TheWay of the Prophet” carries with it a much stronger message than a more common title like “According to the Prophet” would have carried. TheWay suggests singularity of purpose and uniformity of intention.

Remembrance and Prayer was the way of the Prophet, and thus should be our way, too. Al-Ghazali selects very specific points from the Prophet’s life to convey to us just how the Prophet dealt with the various trials of life, including times of extreme duress as well as times of joy. In what light did he view struggle and in what light did he view joy? How did he maintain a healthy balance between hope and fear in Allah? How did he handle adversity and how did he handle success?

The Prophet introduced (and reintroduced for some) to the Arabs a way of life centered on Allah, and we are evermore in need of the same message as we encounter the unchartered territories of the 21st century. In an increasingly materialistic world teetering on the edge of godlessness, “Remembrance and Prayer” is a breath of much needed fresh air.

5 thoughts on “Remembrance and Prayer: The Way of the Prophet Muhammad”